Corpse brides, and other strange things people do with dead bodies 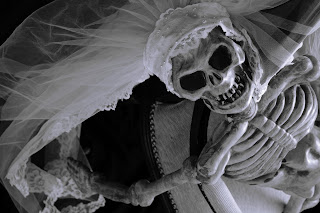 Call me morbid (which you kinda have to be when you’re a mystery writer), but I was fascinated to read an article put out by CNN, which describes all the strange things people do with dead bodies.

In China, there is an old practice of providing “ghost marriages” between women and deceased bachelors. I gather the practice got started so that no woman would have to die as a spinster (no way to verify the rumor that some women preferred to marry dead guys so that they’d escape a fate of faked headaches and arguments over the dinner table with breathing spouses.).

After nearly dying out during the cultural revolution, ghost marriages have recently come back into vogue, but evidently with a new, more prurient purpose. In a country that’s chronically short of women, the practice is now aimed at making sure that dead bachelors are…ahem…satisfied in the afterlife. Tales have been told of people killing prostitutes and other unfortunate women so that these men will get some nooky in the netherworld.

Got some cold cream for that freezer burn?

The much-ballyhooed experiments into cryogenics have evidently run into a snag—frozen bodies are developing wicked cases of freezer burn. Who’d want to be revived in 200 years if you’re doomed to walk around looking like Night of the Shriveled-green Dead?

Here’s a link to the article on CNN, for further reading on the strange things that people do with dead bodies:


Even before I read this article, I was in the process of working one of these practices into my third book, MAKEOVERS CAN BE MURDER. (Won’t reveal which one, though—stay tuned for the book in ’09).

But now I’m getting obsessed with the subject of ghost marriages and corpse brides. The practice sounds so macabre. But it’ll make a killer subplot, won’t it?
Posted by Kathryn Lilley at 1:30 AM

I want to make two confessions: first, your post half creeped me out. Then I read the link, which completed the creeping out process. Second, I enjoyed both the post and the link. Writing mysteries does terrible things to a writers mind -- or, having a terrible mind is what makes writers write mystery fiction. I don't know which.

Oh, but Monica, it's so cathartic for writers to dispose of people who hurt us vicariously like this.
Although I have to admit, Kathryn, that I found some of this stuff rather creepy, too!
--Linda

Deliciously creepy, Kathryn! I'm saving this article for a subplot or two of my own.
I must admit, though, that I skipped that body exhibit when it was here in San Francisco. A little too up close ...

Has everyone read "Stiff" by Mary Roach ... also creepy and informative.

You're right, it is pretty creepy stuff, Monica and Linda! I saw that body exhibit (of course). Talk about creepy--but incredibly fascinating.

Kathryn, I, too, saw that exhibit when it came to St. Paul. Horrible thing to do to human bodies, but so fascinating! How beautifully made we are!

Hi Monica, I spent a good deal of time debating which exhibit I'd be willing to end up in, if any. I ended up deciding that I'm as ready to donate my body for exhibit as I am ready to parade down the beach in a string bikini. NOT! Lol.