With Thanksgiving done, and a late one at that, we are barreling toward Christmas.  Always about now I am thinking that it was just Halloween and felt like fall.  Now the time has changed and the daylight hours have gotten shorter.  I can't really say I'm hunkering down for winter, yet.  Almost no rain, and the temperatures have been above average which here in Southern California means you barely need a sweater during the day.

Today we had Santa Ana winds that scattered giant palm fronds in the backyard and sent an outdoor umbrella flying and blew  It was useless to pick up the giant marigold plant because it just blew over again.  We were invited to friends for Thanksgiving so I spent the time before working on MAKING IT WRITE, the next Writer for Hire mystery.  I was writing about a Sunday in Chicago and was so into it, that when I stopped working, I had to remind myself what day it was.

My deadline is looming and I'm at the point where I'm thinking about it constantly, which means I keep relating everything to what I'm working on.  Even Thanksgiving dinner.  One of the other guests turned out to be a social media influencer type like one of my characters.  Talking to her gave me ideas to add to my character to make her seem more real.

I even related dinner to my manuscript.  Since I am a  vegetarian and don't like to be a bother, I brought along  a turkeyless roast.  I was curious to try it and it was actually quite good.  Veronica Blackstone is also a vegetarian and I'm always looking for something interesting for her to eat.  Now I have it.

And when I get down to the wire like this, I find I sort of write in my sleep.  Just before I got to sleep, I give myself something I'm stuck with  to work on and then the answer shows up in the morning.

And with that, it's back to work.

Posted by Betty Hechtman at 3:12 AM 2 comments:

Tomorrow is Thanksgiving!  Okay, that’s not a surprise, but preparing for it has taken up the time it usually does. Maybe even a bit more, even though there will only be the usual people joining us, family and near-family.

And I apologize that I wasn’t more active on Killer Hobbies this week. No, I can’t blame it all on preparing for Thanksgiving, but a lot of things unrelated to writing kept grabbing my attention.

Fortunately, though, the computer issues I mentioned last week are gone at least for now, thanks to some advice from my techie younger son. And so I’m back to writing, though I’m still not up to my usual speed. But I’m sure it’ll improve. And I do continue to plot and prepare, at least. Yes, some of that is what occupied my mind.

Not much to talk about beyond that, though. So I’ll end now, except to say: Happy Thanksgiving, everyone!

But Knot for Me 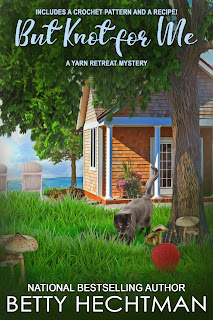 BUT KNOT FOR ME  came out on Tuesday.  It is hard to believe that it is my 25th book.  I remember when all I thought about was getting one book published.  I still come across the occasional rejection letter left from the past, though I finally threw most of them away a long time ago.  Why remind myself of being told no.

The one good thing about finding a rejection letter is that it reminds me that I didn’t let them make me give up.  There were successes along the way that helped keep me going.  Woman’s World published a number of my stories, I had an op ed piece in Woman’s Day.  There were some newspaper pieces and  a couple of screenplays that never got turned into films, but I got paid for one and won an award for another.

I heard myself introduced as an aspiring writer and I had a friend who joked my name was Betty Rejectman.  There was a literary agent I knew who sent me what he probably thought was a well- intentioned letter that said more or less than I should hang up my pen.

But still I persisted.  When my mother died, I had sort of a now or never moment about doing what I’d wanted to do for a long time.  Write a full length mystery.  It was the mid 90s and I wanted to be Jessica Fletcher.  It happened that a writing teacher I knew was holding a four week writers workshop at the local community college and it seemed like the perfect situation to start on that mystery.  At the time I belonged to a woman’s gym and had made a group of friends.  The gym was owned by a man who was not well liked and I put it all together and started writing.

When the workshop ended, the teacher continued it on at her house.  Having the feedback kept me going and I finished the manuscript just as she moved away.  Those of us left started our own group, helping each other.

Despite everyone liking the manuscript, it didn’t sell, but I got an agent.  It took a number of years and taking those characters and turning them into crocheters before I got the call from my agent that two publishers wanted the series.

And now I’m writing my 26th book, the third book in the Writer for Hire series.  There’s something else I want to work on when I have the time and there are more of the Yarn Retreat books write.  Certainly a lot more than the one book I’d hoped for.

Posted by Betty Hechtman at 3:30 AM 4 comments:

Last week I posted about having a cold. I still have that cold. It’s improved but it’s still there. Darn.

And this week, I’m having trouble writing. I like to use my old computer for a lot of reasons, but I’ve been told it’s on its last legs—or whatever it is that computers walk on. Right now, I’m using a subscription to Microsoft 365 to write, since one of my editors told me months ago that my using a very old version of Word was messing up their system when they tried to work with me on redlined changes to a manuscript. I moved on up and am still having issues learning to use 365. Plus, I’ve had some problems with it. And yesterday my old computer started telling me that it doesn’t believe I have a subscription to 365, so it stopped working.

And trying to get advice from Microsoft? It can be done—for a price. But I realized I might not have to pay it if 365 worked on my newer computer that I use some but not a lot. Well, looks like I’ll have to use it even more, since it appears that 365 works on it.

Meanwhile, I’m still letting people know about my latest release: UNCOVERING COLTON’S FAMILY SECRET, my latest Harlequin Romantic Suspense, the tenth in their Coltons of Grave Gulch series. Doing it online, though, as I’d been doing anyway with the pandemic going on. Yay, social media!

I’m also still considering attending Malice Domestic next year but am now hesitating as much because I haven’t gotten the latest rundown on reserving a room at the hotel. When I called for information, I was told that the conference rate was only available until November 4, never mind that the conference isn’t till April. I’m still looking into it.

Another factor is that the L.A. Times Festival of Books is starting up again next year--and, yes, it's the same weekend as Malice.

Right now I’m also letting people know more about how my first mysteries, the Kendra Ballantyne Pet-Sitter mysteries, are becoming available one at a time as ebooks. So far, SIT, STAY SLAY, NOTHING TO FEAR BUT FERRETS, FINE-FEATHERED DEATH, MEOW IS FOR MURDER, and, I think, THE FRIGHT OF THE IGUANA are available as ebooks. And watch for DOUBLE DOG DARE.

And now I need to get busy writing again—on my new computer.