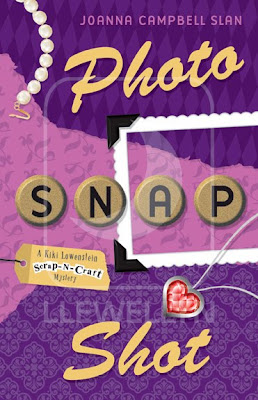 From my house to yours, the merriest of holidays, and a safe, healthy and joyous New Year! Here's a gift from me and my publisher Midnight Ink, a sneak peak at Photo, Snap, Shot, the 3rd book in the Kiki Lowenstein Mystery Series.

“Anya is all right now,” said my daughter’s advisor, “but you need to come pick her up…please. Immediately.”
Three phrases guaranteed to panic any mother: 1.) The babysitter called and there’s a problem. 2.) There’s something on the back of your skirt. 3.) Your child is all right now.
If Anya was all right now, what on earth had happened earlier?
“Whoa. What’s up? Is Anya okay?” I spoke as I waved my keys at my boss, Dodie Goldfader, who owns Time in a Bottle, St. Louis’s premier scrapbook store.
“Ye—es.” The advisor hesitated. “Anya’s okay. But…she found a body.”
My world came to a skidding halt. I froze in the middle of the store and yelled, “She found a WHAT?”
“A body. A corpse. Uh, someone died. Was killed. In the balcony of the Delacroix Theatre here at school. Could you come get her?”
I smacked my cell phone closed and ran, sprinted really, through our stockroom, doing high hurdle jumps over boxes of scrapbook supplies. My co-worker Bama followed me with her eyes. I heard Dodie calling behind me, “Do you need me to drive?”
Bama yelled, “Kiki? You all right?”
Gracie, my harlequin Great Dane, jumped to her feet and yodeled as I ran past.
But I didn’t pause for a second.
My daughter needed me. Twelve-year-old girls should not be stumbling over dead bodies.

Chapter 2
Okay, I said to myself, calm down. Anya is fine now, I repeated under my breath. I flipped on the radio to hear the dulcet tones of the local NPR broadcaster announcing the next program. If they weren’t breaking in with a news bulletin, it couldn’t be a crisis. Or could it?

I had this sneaking suspicion something was rotten at CALA, Charles and Anne Lindbergh Academy, the hoity-toity private school my mother-in-law Sheila shells out big bucks for my daughter to attend. CALA is the educational stomping ground of the veddy, veddy rich here in St. Louis. I bet there was no news about a death at the school because the “powers that be” had decided to keep this quiet. You can do that—at least for a short time--when you occupy the top rung of the food chain.
Taking a corner with my ancient red BMW, I thanked the good lord for its superior handling ability. The car was too old to have Blue Book value, which was exactly why I’d hung onto it after my husband met his untimely demise and I’d been plunged into poverty. I did a couple more two-wheel screeching turns, ran a couple of orange lights (that’s when yellow turns red on you), slipped between two parked police cars, and slid into a parking spot near the portico that marked the Upper School Office of the school.
On my way in, I stepped on the school seal.
I was supposed to bend down and kiss it.
Uh, no.
My Keds gripped the marble of the hallowed halls as I barreled past the dean’s office. A tight knot of crime scene investigators carried cameras and miniature yellow cones with numbers on them. And yeah, I heard them yell at me to stop, but what did I care? I needed to find my daughter. So I ran through the open double doors of the balcony and didn’t give one moment’s thought to the crowd on my heels. Nor did I stop when I saw the yellow crime tape. Instead, I did a hurdler’s jump right over the top of the plastic barrier. Out of the corner of my eyes I noticed the expression on the nearest cop’s face. He was impressed.
As well he should be. I’d cleared the tape in one and not broken stride. I’m not naturally athletic, but because I was concerned about my child, I was super-charged. So, I came down on the other side of the barrier and didn’t miss a step. I took two long strides into the balcony and nearly stumbled over the medical examiner and an assistant. (I recognized the M.E. from pictures in the paper.) They were carefully flipping a corpse onto its back.
The expression on Sissy Gilchrist’s face was one of pure surprise. I probably looked pretty shocked myself. The difference was I’d get over it, and Sissy wouldn’t, seeing as how she was dead.
“Who are you?” The M.E. glared at me. “This is a crime scene. Get her out of here.” She gestured angrily to a cop who now had me by the forearm. His grip hurt.
“My daughter…” I sputtered. “My child found…her.” And I pointed to the dead woman on the white sheet. “The school called. I’m Kiki Lowenstein. Anya’s mother.”
The cop pulled me away. “Your daughter’s fine. We have her in an office.”
But before I turned away, I got a good look at Sissy…or her remains. The back of her head was a pulpy, bloody mess. Atop her long blonde hair sat a crown of carmine. Moving her body had created an uneven streak of red which bore a strong resemblance to Picasso paint stroke.
The cop led me toward the hallway. “Ma’am, you need to come with me.”
“Right,” I murmured. A wave of dizziness hit me suddenly, and I felt a little sick. Then came a thought: “Someone killed my husband last year. And he’s still on the loose. Are you sure my daughter’s okay?”
“She’s fine.” A familiar voice answered. I stepped away from the cop who was towing me along and stared up into the eyes of Detective Chad Detweiler.
He sighed and rubbed his chin. His Heineken bottle green eyes with their gold flecks regarded me sadly. “I got here immediately after they called. I’ve been talking with her. She’s shook up, but she’s okay.”
I nodded. Detweiler and I stood there. Motionless. Silent. Industry continued around us, with investigators marking spots, taking photos, making notes. We were two rocks in a creek, dividing the flowing water.
I hadn’t seen him in months. In fact, I’d purposely avoided him. I’d dodged his phone calls and torn up his letters. I’d fallen in love with him after he investigated my husband’s murder. He’d been a frequent visitor to my home, a friend to Anya, and very nearly something more to me.

When I discovered he was married, that was it. The end. C’est fini. Cut!
But here’s the truth: I was glad, really glad, that he’d come to my daughter’s rescue. There was no one else on earth who could have handled this situation better than he. Of that I was sure.
Now I was certain Anya was safe. At least temporarily.
“Where’s Anya?”
“She’s in the middle school nurse’s office.”
“What happened?” I asked.
He took my elbow and guided me down the halls. “Two girls—Anya and Matilda Earhart--were in the hall on their way to class. Coming back from a session in the library. They are working on a project together. They heard a scream. They ran into the balcony area and found the nurse, Thelma Selsner, bent over the deceased.”
“Sissy Gilchrist.”
“You know her?”
I gave a so-so wiggle-waggle of my hand. My fingers shook a little.
“The girls immediately went for help.”
“Why was Nurse Selsner in the balcony? Did she hear or see something?” As I spoke, my stomach flipped over. I had a delayed response to seeing a body. “Uh, excuse me,” I said and did a fast trot down the hall and around the corner to a ladies room, all the while praying I’d make it in time. Which I did.
When I returned, Detweiler acted like nothing happened. He handed me a Diet Coke. “They were out of Diet Dr Pepper.”
He’d remembered!
I sipped the spicy blend gratefully and tugged at my blouse self-consciously. Over the summer, I’d embarked on an ambitious plan to forget Detweiler. I called it my “eat my way to nirvana” scheme. The plan including eating everything and anything that wasn’t nailed down. (I did draw the line at dog yummies. Gracie, my Great Dane, had kept a worried eye on me.) I wasn’t a “Rats, I ate an entire carton of ice cream” type of girl. I was more of a “Gee, I started at the top shelf of the refrigerator and ate my way through to the chiller drawer” sort of snarfing fool.

Twice I’d made myself physically sick by overeating. Once I’d had food poisoning.
But those were minor inconveniences. Mainly, I just kept chewing and swallowing.
And now all my clothes were too tight. I bet I looked like a sausage ready to split its casing.
Ugh.
“Mrs. Selsner heard voices from the theatre. She’s the Upper School Nurse. Her office is kitty-corner from the balcony. She wondered what was up and decided to check things out.” Detweiler sighed. He wiped his face. A crease was forming between his eyes. It would be one of many. “When the nurse screamed, the girls had just left the restroom and were in the hallway right outside the theatre. The kids ran in to see what was happening.”
That was all the police had. No one had seen Sissy go into the balcony. It was supposed to stay locked unless there was a program.
No one had seen anyone leave the balcony. There were no bloody footprints to follow—and none on the carpet. At least, not prints obvious to the naked eye. Now the crime scene folks would be busy charting, gridding, photographing and examining the area, but unlike forensic teams on television, the fruits of their work would take weeks, even months.
“The girls didn’t see much. Just Mrs. Selsner screaming and bent over someone.” Detweiler had read my mind. “Maybe some blood spatter on the carpet.”
Thank heavens for small favors.
No one suspicious had been reported by the teachers. Or the janitorial staff. Or the administration. The murderer had somehow blended into our tight St. John’s Knits community.
What would happen next? How would the school respond? What would CALA do?
“How did she die?”
He shrugged. “Too early to tell.”
I reached past him for the handle of the Middle School Nurse’s Office. “It was murder, wasn’t it? And the killer is running loose, right?”
He nodded.
Through some superhuman effort, I managed to keep myself from falling into his arms and sobbing.
Oh, but I wanted to.
I did not need this. Anya and I had been through so much with the murder of her father, the burglarizing of our home, and the ongoing threats from the person who had master-minded my husband’s death. We’d recently moved. It had taken us all summer to “normalize.” And we’d turned our backs on Detweiler after I’d discovered he was married—a “small” fact he’d neglected to mention although he’d been a frequent visitor to our home and my fantasies.
Okay, it was good that he’d been here for Anya. But it was bad for ME that he’d shown up. I wasn’t about to let down my guard. Not when it had taken me all summer to put him out of my mind.
Right. Who was I fooling?

Awesome! Can't wait to read the rest of it. Keep up the good work!

MAY WONT GET HERE SOON ENOUGH...I WANT TO READ IT TONIGHT!