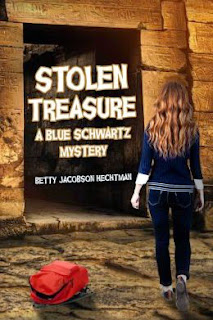 It is less than a week until Silence of the Lamb's Wool comes out. I am still working on updating my website which should be up later today. Not only am I adding the Silence of the Lamb’s Wool cover and information about, I am finally updating it regarding my children’s mystery. Actually I hate to refer to it that way because it is really any age mystery, but since the protagonist is a thirteen year old babysitter who likes to cook is gets pigeon holed there.

Last fall I got the rights back and I decided to bring it out as an e-book with my agents help. At her suggestion, we changed the title from Blue Schwartz and Nefertiti’s Necklace to Stolen Treasure, and since the art work belonged to the original publisher, we needed a new cover.

There was a bit of minor editing and then early in December it became available. It was such a quiet launch, I didn’t even know at first that my agent had put it up on Amazon, Nook, Smashwords and Apple IBooks. It was a confusing time. The original paper book was still available at some bookstores under the original title of Blue Schwartz and Nefertiti’s Necklace and the e-version under Stolen Treasure. I was sure how to update my website to deal with it all, so I left that part of the website untouched.

Since I was updating my site for the release of Silence of the Lamb’s Wool, I decided to finally update Stolen Treasure, too. Instead of the tab saying Children’s Mysteries, it’s going to say Blue Schwartz Mysteries, which implies there will be more.

I would like to write more Blue Schwartz Mysteries. They take place in the Chicago neighborhood where I grew up. It is an extremely interesting area. Of course, I never really appreciated it when I was a kid living there. When I was growing up it was a place for artists and writers looking for cheap rent. The University of Chicago campus is more or less the anchor of the area. The beach is a mere four block walk. The Museum of Science and Industry is a shorter walk and in the old days when the admittance was free I used to go there every Sunday and wander the halls. It’s in the only building left from the 1893 World’s Fair.

The rents have gone up and a lot of the old buildings are gone. But the heart of the neighborhood is the same. It’s a great backdrop for a thirteen year old Nancy Drew wannabe. I already have an idea for her next adventure, I just need the time to write it.


Blue never got her fanfare last December, so as far as I’m concerned, I have two books coming out next week - Silence of the Lamb’s Wool and Stolen Treasure.

I very much enjoyed reading Stolen Treasure, and I will look forward to a sequel or two. The supporting characters were as much fun as the heroine, Blue. (Wish I could create that extra time for you to write.)

Congrats on your upcoming book releases!

Congrats on having two books coming out next week, Betty! And I'll bet you'll write a sequel to Stolen Treasure someday, if it's something you want to do.

Planner, thanks for the congrats and the wish to create more time for me.

Linda, you are an inspiration. You write so many books in different genres.

I'm a fan of your writings and I enjoyed reading Stolen Treasure very much,hoping that there will be a sequel for the book. Lastly, Congrats for your book release. Thanks for writing good books, keep it up =)

Thank you, Larry. You made my day!