I wrapped up books one and two in the Merry and Bright Handcrafted Mystery Series (former series title was the Twas the Murder Before Christmas). Last week, I turned in the final edits for Not A Creature Was Stirring and the next stage for that book is release day. And this week, sent in the manuscript for book 2 Be Good for Goodness Sake. The last month (okay, actually 2) had been a little hectic with juggling both of the deadlines and even having to push hem back a bit. I was happy with book two but do foresee some edits in the story line. There was one new secondary character who I think might have inserted themselves a little too much into the story. I'll see what my editor says. Sometimes, I'm not quite the best judge of my own story.

The title of this blog post is battling doubts, and it's not the book I just turned in that's the battle field of my doubts, though I am having some for it. I think it's natural for writers to not be sure of a story once it leaves our hands/computers. Or, at least I know I always do. The doubt that has me at a standstill is over whether or not to republish (self-publish) my inspirational romantic suspense series. I have reedited the first book, am working on the second book, and designed covers for all five of the books. Yet, now that the first book is formatted and I'm about to press the publish button, I am frozen.

I love the series. The characters. Why I wrote it. It means a lot to me. But, I'm scared to take that final step and get them back out into the world. I'm not sure if it's because it wasn't well-received (as in sales wise) and I'm afraid that I'll be disappointed yet again. Or, the fact that releasing them is giving up my "hopes and dreams" on what could happen and discovering the "what is" for the books. Honestly, it's a little scary.

The New Beginnings series are romantic suspense stories about self-rescuing princesses and tarnished knights out to set the world right. I adore all the books I have written, but have to say this series holds a special place in my heart. These books are about pushing past and through the traumas in life that want to keep us captive, want to pull us down into despair and keep us there. It's about clinging to hope for a better future even though it seems life wants to break you. About knowing when to let go and when to continue fighting.

And in writing that out, I realize it's not time to "let go" but to push through my insecurities. I don't want to let this series go. And to battle these "demons" a little bit, I'm going to be brave and share the cover and the copy. Because then it'll be back out there. It'll be real. And the first step is always the hardest...next up will be uploading the formatted to Amazon. 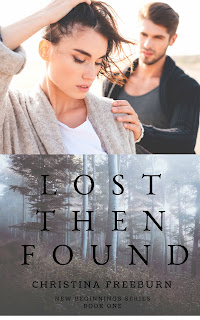 In order to uncover the secret a teenager girl disappeared to keep, and a killer wants silenced, Jonas and Renee must struggle through distrust and the pain of their pasts to work together to save the life of a teenage girl – and their own.

Posted by Christina Freeburn at 2:29 PM