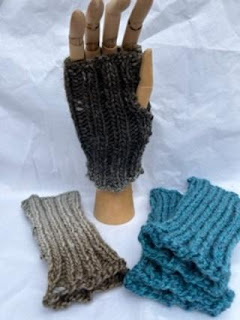 I have  been getting together everything to update my website.  Since KNOT A GAME comes out next month and SENTENCED TO DEATH comes out in February, I want to update it for both books.  I have almost everything assembled to send to my web guy.  It's always a challenge to explain the changes to him.  I think something is clear, but then realize it isn't particularly in how to change the landing page.

I still have to figure that anyway and write whatever copy goes on the page.  This time I'm probably going to keep whatever I write brief.  I was thinking just a blurb about each of the two books. I got a nice review from Publishers Weekly for SENTENCED TO  DEATH, so will put in a quote from it.

I always add a picture of the project I include in the books.  It was a challenge to figure out how to do the hand warmers that are featured in KNOT A GAME.  They look pretty plain when they are just laying on a table, just like knitted tubes.  I wanted to show one in action and thought of putting one on my hand, but I'm not good at taking pictures with one hand.  And then I remembered a wooden hand I had that I got to use for drawing.  It had been absconded by Jakey to use in his creepy Halloween decorations and I had to find it.  But I think it worked.  I wanted to show both samples I'd made of the hand warmers.

I'd used self-striping yarn for one of the pairs and discovered as I was making the samples that they wouldn't be identical because they were each made from a different spot in the color variations.  It ended up working okay in the book as Casey's yarn helper is known for her love of wearing unmatched earrings and socks.  She would love the idea of hand warmers that blended but weren't identical.  I also made a sample of a single color yarn since that was what I discussed in the book.

I'm actually looking forward to using them, but had to laugh at myself for not taking them with when I went to the Enchanted Forest as Descanso Gardens  where  I really could have used them.

Posted by Betty Hechtman at 1:13 AM

Those look like hand warmers I could even use here in Central Florida. We do get near freezing in January. Hope you had a great Thanksgiving!

Sally, I found out the hard way that you are right about the Florida temps. We went to Disney World in the winter and I was surprised at how cold it was. I was really glad that I had put in a jacket as an after thought. There were lots of people in shorts and tiny tops shivering. I hope you had a great Thanksgiving too.