On the road for DYING TO BE THIN: week two 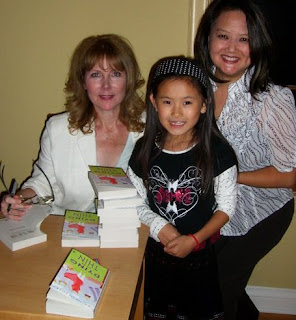 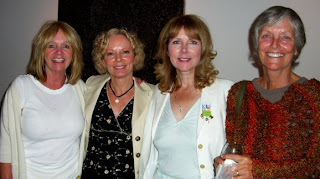 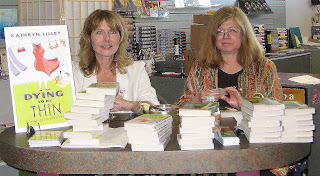 This past week has been incredible.

My week-that-shall-live-in-fond-memory started last Friday, when I attended the book launch party for DYING TO BE THIN. And what a party! The hostess, Mary Farrell, pulled out all the stops to make the party a night to remember. She brought in an awesome caterer, Jen Sweet (gotta love that last name), who produced Whoopie Pies wrapped in ribbons that were made from the text of my book (you have to read the first chapter of DYING TO BE THIN to understand the Whoopie Pie thing); Jen produced to-die-for empanadas, as well as dessert “cones” made out of facsimiles of the book cover. I’ve never before been to a party with such imaginative catering—I hereby nominate Jen for next year’s Top Chef!

There was a big, festive crowd, and everyone had a blast! On hand were Sisters-in-Crime LA Chapter Prez Diana James, SiS LA V.P. Susan Kozar Beery, writer-comrade Kathy Kinston, and Diana’s husband, Darrell James, who won the 2007 DEADLY INK award for his work, Trust A Dead Man To Keep A Secret. Also in attendance were my writing critique group members: Elizabeth Ralser, Lynn Schwartz, and Warren Deasy, who helped organize the event. Our critique group’s fearless leader, Lyn Stimer, could not come due to a family illness, but she was there in spirit! Oh, and Pamela Eells, the Emmy-nominated writer of Disney’s The Suite Life of Zack and Cody, was also there. She’s been my best friend ever since our Wellesley College days!

On Saturday, I appeared with fellow Killer Hobbies blogger, Linda O. Johnston, at the Mysterious Galaxy Bookstore near San Diego (check out Linda’s newest book, Fright of the Iguana—it’s a great read!). Even more fun than selling books was getting the chance to meet the bookstore staff, both of whom are named Linda. We had three Linda’s in the house!

On Sunday, I gave a talk at the San Diego Public Library. The talk was titled (somewhat self-importantly) as “From daydream to reality: one writer’s journey to publication”. But in reality, it was a fun discussion of anything and everything about the writing process. Lynn Whitehouse and her entire staff, including technical guru, Alan Bugg, made me feel very at home.
Upcoming

The fun continues this weekend:

This Saturday, October 13th, I’ll be signing DYING TO BE THIN at 1 p.m. at The Mystery Bookstore, 1036-C Broxton Ave in Los Angeles (aka Westwood), California.

Please stop by for a visit at either location, and say Howdy!

Posted by Kathryn Lilley at 1:00 AM

Congratulations again Kathryn. I can feel the excitement! I wish you many more parties ...

Enjoy these great times, Kathryn. You worked hard for it. All the best. Joe

It's fun when a new book comes out, and especially great when it's your first one! Thanks for posting our photo, Kathryn, and I hope you continue to have a great time with your book's premiere.
--Linda

Thanks so much for your good wishes, Camille and Joe! It was great seeing you at Mysterious Galaxy, Linda! Best, Kathryn

Congratulations on what sounds like a fantastic launch! Best wishes to you across the miles!

Thanks, Marta! And congrats on Silenced Cry, your new book! Best, Kathryn

How much fun! I feel like I was there. Good for you, Kathryn.

What a great start! You deserve it. Keep truckin'

Thanks, Deb and Joanna! It's been a great two weeks! Best, Kathryn