It’s almost August. That means it’s time for my next published novel!

That book is HER UNDERCOVER REFUGE, the first in my new Shelter of Secrets miniseries for Harlequin Romantic Suspense.  That miniseries is a spinoff of another, also for HRS, that was called K-9 Ranch Rescue. 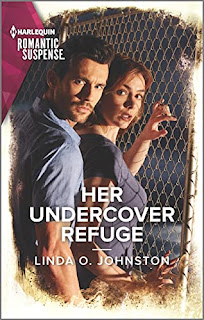 And I’m delighted to have HER UNDERCOVER REFUGE published!  My last novel was published in February 2020, and that’s a long time between books for me.

The Shelter of Secrets series is a fun one. It’s about a very special animal shelter where mostly needy dogs and cats are taken in and cared for and found new homes. Sounds like many good animal shelters.

But this one hides a secret. Some people live in the shelter, too, to take care of the animals. Most of them appear to have been homeless before they were hired.

That’s not their real backgrounds, though. This shelter is also a human shelter, caring for people in witness protection!

I’ve already found a copy of HER UNDERCOVER REFUGE in my local Barnes & Noble store. Hopefully, more to come! Although I miss attending conferences and chapter meetings, but that may get closer to normal, too, one of these days.

Meantime, I’ll keep on writing. And obeying my dogs, of course. They don’t seem excited about the new book, even though they saw my author’s copies arrive.