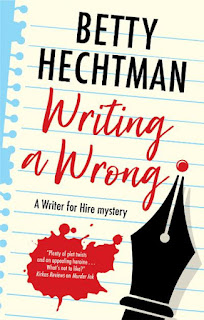 WRITING A WRONG  is officially out, the print version.  The e-book seems to have come out last month.  It's been kind of when it rains it pours lately.  Suddenly I had two releases at almost the same time.  It's been nice hearing from readers that they enjoyed ONE FOR THE HOOKS and ask about the next book.  For right now,  I don't have a contract for another book in the series. I'm not sure of what is going to happen.  I love the characters and don't really want to say good bye to them.

But in the meantime I'm writing the next Writer for Hire book and I working on the the copy edit for BUT KNOT FOR ME. My editor said he thinks its the best one yet. I was worried about how it was going to be working on the new computer and was sticking with my familiar laptop.  But the only place to work on the laptop was on a couch in the crossroads of my house which meant, lots of noise, people talking to me and cats coming for a visit. Add to it a visiting grandson driving remote control cars over my feet.  The challenge of the new computer seemed suddenly worth whatever obstacles I had to overcome.

You might wonder why the coach was the only place to work on the laptop.  It has to do with arms on chairs making it so I can't type or tables being the wrong height.

So I  started to load programs into the new computer.  I think I wrote last week about the long time it took for me to manage to download Office. My WordPerfect disc arrived though I still haven't installed it.

The big surprise was that I have gone back and forth and a bunch of different computers and changing to Windows 10 is no big deal.  I was really surprised with Word.  The last time I got a new version, I remember being freaked out by the changes and simply not able to take in all the stuff on the tool bars.  It turns out the 2019 version looks like the 2010 version with a few changes.  I did have to monkey around to get the copy edit marks to show up. But I did.  I've already gone through the first 50 pages.  I always tweak a little more. It's funny reading it now because it's all new to me and I'm reading it like a reader but with the power to make changes.  There will be a quick turn around on this book and I think it will be released  later this year.  I can't wait to see the cover they come up with.

The new monitor is much better than the old one.  The keyboard actually works.  I'd been using a cheapie one I got at Target and never really noticed that some of the letters were a problem.  I was just used to it.  When I tried working on a manuscript, it was actually a pleasure. No frozen computer. no waiting forever to have a program open and sometimes just stop in the middle.

It had been on my mind that my old one was on it's last legs and I so dreaded the transition, but now it's done.  Thankfully I was worried enough about the old one to have Dropbox copy everything, so I didn't lose any files or photos. And it turned out that accessing them isn't a problem either. I don't feel like I'm waiting for the shoe to drop anymore and can just relax and type.

Nice too that I can disappear into the tiny room I work in, away from the noise, people and TVS, though I still have a kitten companion who jumps in my lap.

I love it when something you dread works out for the best. I'm so glad it did for you.

Me, too. I am still in kind of shock that I went from the old computer to the new one. I was so dreading it and now it feels like magic that I'm working on the new one. I am so happy to have a keyboard that works. I was so used to the old one, I didn't notice how bad it was.

Congrats on your new releases, Betty. And I'm impressed at how well you're doing with all the techie stuff!