I'm delighted that Lois Winston is our guest blogger today on Killer Hobbies.

And here she is! 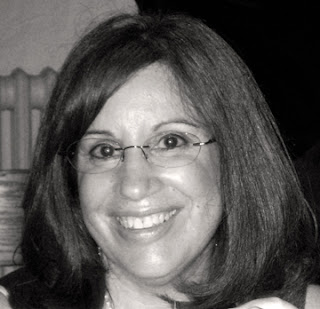 If you’ve ever watched a Marvel movie, you’re familiar with the term “multiverse.” For those of you not into superheroes, multiverse is the concept of a theoretical reality where there are an infinite number of parallel universes. In Marvel World it means the creators can continually tweak the concept and characters to come up with new plots, and it will always make sense because the story is simply taking place with the same characters in another parallel universe. That way you can even bring characters killed off in one movie back in another because in the parallel universe the character didn’t die.

But what does this have to do with Killer Hobbies?

It occurred to me recently that in my Anastasia Pollack Crafting Mystery Series, I’ve created a crafting multiverse of sorts. Years ago, when I was approached about writing a crafting cozy series, I did a bit of research into the sub-genre. I discovered that all the crafting cozies being published at the time were anchored by one specific craft with the setting being either a craft shop or a group of women who crafted together, usually in quilting bees or knitting circles. An occasional outlier was the crafter who sold her wares at craft fairs and in galleries.

Since I didn’t want to compete with established authors, I decided to make my amateur sleuth the crafts editor of a women’s magazine. By doing so, I could feature a different craft in each book—thus creating my crafting multiverse. This concept has also enabled me to move Anastasia around. She might find as many dead bodies as Jessica Fletcher, but she’s not finding them all in her own hometown. (Even the producers of Murder She Wrote eventually realized that if the status quo continued, there’d soon be no residents left in Cabot Cove.) Anastasia has come across dead bodies at her office, at a TV studio, at a retirement and convalescent home, at a trade show, a crafts fair, on a cruise ship, and in her own neighborhood.

In Stitch, Bake, Die!, the tenth and latest Anastasia Pollack Crafting Mystery, Anastasia finds herself confronting a dead body at a conference where she’s presenting workshops and judging a needlework competition. Ten books, ten universes for my sleuth to explore. And because the multiverse is infinite, more books to come.

Do you enjoy cozy mysteries where each book in the series takes place in the same familiar setting, or do you prefer the setting to change from book to book within a series?

With massive debt, a communist mother-in-law, a Shakespeare-quoting parrot, and a photojournalist boyfriend who may or may not be a spy, crafts editor Anastasia Pollack already juggles too much in her life. So she’s not thrilled when her magazine volunteers her to present workshops and judge a needlework contest at the inaugural conference of the New Jersey chapter of the Stitch and Bake Society, a national organization of retired professional women. At least her best friend and cooking editor Cloris McWerther has also been roped into similar duties for the culinary side of the 3-day event taking place on the grounds of the exclusive Beckwith Chateau Country Club.

The sweet little old ladies Anastasia is expecting to meet are definitely old, and some of them are little, but all are anything but sweet. She’s stepped into a vipers’ den that starts with bribery and ends with murder. When an ice storm forces Anastasia and Cloris to spend the night at the Chateau, Anastasia discovers evidence of insurance scams, medical fraud, an opioid ring, long-buried family secrets, and a bevy of suspects.

Can she piece together the various clues before she becomes the killer’s next target? 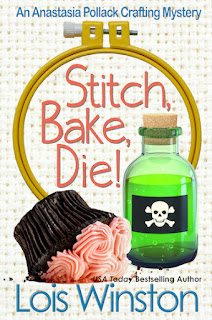 USA Today and Amazon bestselling and award-winning author Lois Winston writes mystery, romance, romantic suspense, chick lit, women’s fiction, children’s chapter books, and nonfiction under her own name and her Emma Carlyle pen name. Kirkus Reviews dubbed her critically acclaimed Anastasia Pollack Crafting Mystery series, “North Jersey’s more mature answer to Stephanie Plum.” In addition, Lois is a former literary agent and an award-winning craft and needlework designer who often draws much of her source material for both her characters and plots from her experiences in the crafts industry.

Thanks so much for hosting me today!

You're very welcome. And thanks so much for the wonderful post!