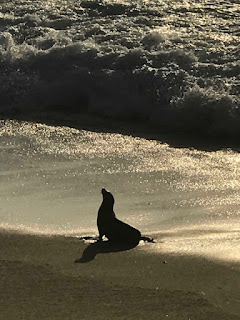 I am still  immersed in some business stuff, but the end is sight. How I long to stop fiddling with financial software and get back to finishing MXED KNOTS.

But there were interruptions and the middle of my week went serendipity on me.  I ended up on a two day trips to San Diego.  My luggage was a Trader Joe's grocery bag.  We ended up at Sea World.  It was my first time and it turned out to be something I want to repeat.

The second day we went to Coronado which isn't really an island even though it bills itself as such.  It's really a sand bar with a long strand of sand that connects it to the mainland.  Even so it is charming with  interesting houses and lovely gardens.  I love the Del as the Del Coronado is called.  I think it dates from 1888 and Thomas Edison turned on the electricity to the place.    I always feel like there are ghosts from the past when I visit the old hotel.

On the way back in order to miss rush hour traffic we stopped in La Jolla.  We wandered around the cute downtown area before heading down the steep hill to park .  The plan was to walk along the pathway that is above the beach.  I thought it would just be look at the ocean time, but then it turned out that the beach was littered with sea lions.

Mind you we'd already seen a sea lion show at Sea World, but this was different.  The sea lions seemed indifferent to their audience, though one did chaise a kid who got to close.  Personally, I was glad to stay on top of the cliff and watch them from a distance.

We left as the sun  was sinking into the ocean.  By then Traffic was down.  On the way home we were already planning out next trip.

Posted by Betty Hechtman at 3:37 AM

The Del Coronado does supposedly have a history of ghost stories, and I have heard there is no 13th floor. Turn someone like Adele loose there !

How fun that you saw the wild sea lions!