One for the Hooks 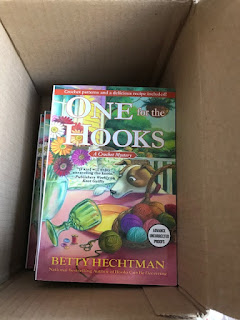 I was happy to receive a box  of advance copies of ONE FOR THE HOOKS  the other day.  Some advance copies only have a plain paper cover, but these have the actual cover of the book.  It’s my first glimpse of the whole thing complete with cover copy.

I have an attachment to all of my books, but maybe a little more to this one.  I think it’s because it was written during such an emotional time with the pandemic, my brother dying and some other big bumps in the road.  It’s also because it most likely will be the last book in the series.  I have spent fourteen books with the characters and it’s hard to think of letting them go.

But I have BUT KNOT FOR ME to finish writing and two more Writer for Hire books, along with an idea for another series I’m working on.

I tried writing this blog last night and my brain just stalled.  I knew it was the time of day, or in this case, night.  If I’d been on a roll of writing, it probably would have been okay, but starting something that late doesn’t work.

For me, morning is my most creative time.  As in this morning I was drinking coffee and thinking about the next scene in BUT KNOT FOR ME and the next manuscript I’ll be working on.  I came up with a plot line which I submitted to my editor.  Veronica is working with a woman ghost writing her autobiography.  The woman has a secret that she has hinted at, but not revealed yet other than it will cause chaos to the people around her.  She dies suddenly and Veronica uses what the woman has already told her to figure out the secret and in turn who killed her.  The problem was that I didn’t know what the secret was.

But there between sips of coffee and glances out the window, her secret and all the problems with it floated into my mind.  I captured it all in some scribbled down notes.  It was like the words tumbled out of the pen.

And now to set that aside and rush back to BUT KNOT FOR ME before the flow ebbs.

I'm looking forward to this book coming out. When is the release date? I'm a little sad to hear it will be the last in the series but I'm enjoying your new series as well. Its good to know more great books are on the horizon. Thank you for sharing your talents.

Sally, thank you for the the kind words. It is so nice to hear you're enjoying my books. ONE FOR THE HOOKS comes out August 11. I wrote it so it could be the last book, but it also ends with a lot going on for Molly. I actually kept thinking about it after I'd turned in the book. More than thinking about it, it sort of haunted me, like I stopped writing, but the characters kept on going.

Hmm....I left a comment which has disappeared. I asked if your readers might step up and write to your publisher in protest !!! I really do hope there will a few more adventures for Molly. Casey and Dane need to get their act together before that series suddenly ends...
Writer for Hire is only on Kindle at this point, I guess. At least that is what Barnes and Noble told me ???

You will keep writing new things, and I will keep reading...but losing Molly and her friends will be very hard.

I don't know where my first comment went, they made me do the robot thing 3 times !!

Linda, the title of the first Writer for Hire book is Murder Ink and it is available in hardcover. I know Amazon has it. I'll have to check with Barnes and Noble.

I'm guessing if ONE FOR THE HOOKS does really well, my publisher may change their mind.

I am honored that you feel so much for Molly and her friends. I hope something turns up so that there will be more books.

I am working on Casey's next adventure right now.

Sorry about the problems leaving the comments.

Linda, I just checked Barnes and Noble online and they have the print edition of Murder Ink.

Sounds as if coffee is an important part of your plotting, Betty. Me, too!

Linda, morning coffee and a yellow legal pad seem to be a magic combo.